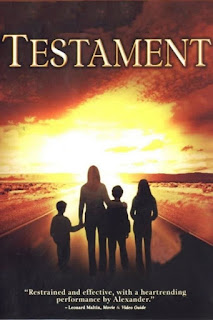 The Wetherlys are an average small town American family, struggling to survive in the aftermath of a nuclear war. Dad was in LA when the missiles hit and never made it home. Mum has to watch her kids sicken and die of radiation poisoning, while trying to keep things going.


Contemporary with films like Threads and The Day After, Testament features none of the scenes of mass destruction, mass panics or looting but is equally as harrowing, albeit in a much more quiet, restrained fashion. The family dies off one by one, and she has to bury her kids in the back garden, stitched up in bedsheets. At the same time, it does show the how people really come together in disasters- the town pulls together to try and survive, orphaned kids are cared for and people start looking out for each other. That said, the end scene where the mother considers ending it all it for her and surviving kid by gas themselves in the garage is one of the most wrenching in any post-apocalypse movie.
Not as iconic as Threads, but equally as harrowing.
Posted by ScottL at 11:32 No comments: 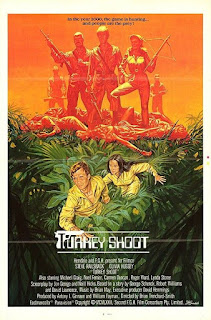 In a future Australia on the verge of anarchy after a holocaust, political dissidents are sent to “re-education” camps. At Camp Thatcher, the most notorious of these, the governor and friends use the inmates in brutal hunts.


The plot's the standard Most Dangerous Game hunted-turning-the-tables-on-the-hunter schtick, but with some ridiculously over the top deaths- exploding arrows to heads, a hairy mutant who looks like a refugee from Carry On Screaming gets cut in half by a bulldozer, heads get shot clean off, hands severed and so on. If you believe the stories, live ammunition was apparently used in some scenes to save money and keep the actors on their toes and the hand severing scene came close to happening for real after one of the actors missed her cue. A classic piece of Ozploitation trash.
Posted by ScottL at 11:22 No comments: 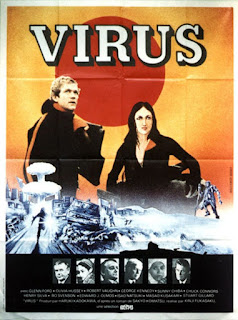 A genetically engineered virus is accidentally released, killing off vast numbers of people. As governments bicker, hospitals are overwhelmed, martial law is declared and soon the only survivors are international outposts in Antarctica, who now have to cope with being the last people on Earth. This throws up other problems for them, such as there being 855 men and only 8 women. Worse than this, they realise that an earthquake could set off the USA's automatic retaliation system (which had been armed by a belligerent general in his death throws played with characteristic bad assness by Henry Silva), launching a nuclear strike at the USSR, whose own automated system would then fire off their missiles, including one aimed at the Antarctic, where they were convinced the USA had a secret base. A couple of scientists travel to Washington DC to try and disarm the system. They fail, and nuclear war ensues. The surviving scientist treks the length of South America to re-join the survivors of the Antarctic colony.


A lavish Japanese production, this was the biggest budget Japanese film of it's time, with a cast of Western actors used alongside the Japanese with an eye to breaking into Western markets. Unfortunately, the film never got a full release, eventually make it to TV in a heavily cut down form. Most Western versions are 108 minutes as opposed to 156 minute original. Most of what excised are scenes with the crew of the Japanese station (including a powerful scene where they make radio contact with an orphaned child in the USA) and the final trek to South America. The shorter version still makes sense though does feel hurried. It's a real shame as it's actually a good movie; the story's compelling, the cast give good performances (and it's a stable of great contemporary b-movie stars) and it actually has the budget to show the martial law, piles of burning bodies and so on most films only hint at. The film's now public domain and is a poundshop DVD staple, but it's worth tracking down the full version.
Posted by ScottL at 11:11 No comments: 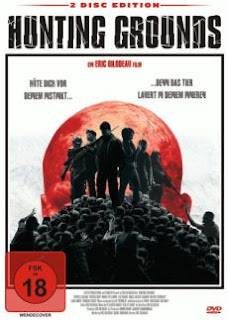 After an ecological collapse, people are confined to sealed cities to allow nature to heal. Fed up of virtual reality hunts, a group of hunters arrange an illegal expedition out of the city to hunt for real in the wilderness. Unfortunately for them, a military experiment into a regeneration serum has caused a zombie outbreak in the woods, but they may find a worse danger among their ranks.


While it had an interesting set up, it's actually pretty disappointing that once the characters leave the automated VR heavy city, they just run into zombies. It could have been much more interesting if they had been faced with natures revenge. Hell, even these days some backwoods cannibals would feel less hackneyed than zombies. The tone is a bit odd, too- initially it feels quite serious but when the zombies appear, there's a lot of blatant stabs at comedy, such as the zombie in the exo-skeleton who is unkillable as he's wearing a high-tech helmet so can't be shot in the head. It's nicely filmed and makes the best of the low budget, even if it 's a bit CGI heavy (though the green screen actually work well for the virtual reality scenes). Not bad but could have been better with a bit more imagination in the storyline.
Posted by ScottL at 11:33 No comments: 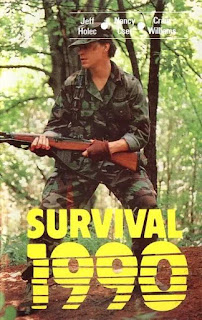 Nuclear accidents and economic collapse have caused the end of the world as we know it. A young couple cling on, living as hunter-gatherers in the wilderness, fending off attacks from marauders. They encounter a young survivalist, and after initial hostilities, they become friends.


A truly awful effort, it looks like it's been filmed on a camcorder down the local park. Very little happens, other than sitting round the camp fire, discussing how they survived the holocaust, though these poorly scripted and badly acted chats become weirdly compelling after a while. Maybe it's just in comparison to the shoddy action scenes. There are a number of head scratching plot elements such as the woman being a mutant (and characters being able to tell this) but looking completely normal (though she has no memory, apparently) and the man explaining how he never knew his geneticist father and then his clone brother turning up but being killed off before any resolution is provided. Not the best use of 90 minutes of your life.
Posted by ScottL at 11:20 No comments: 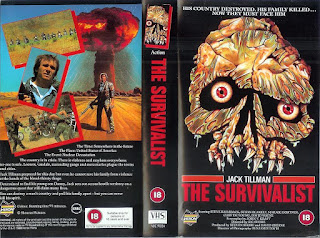 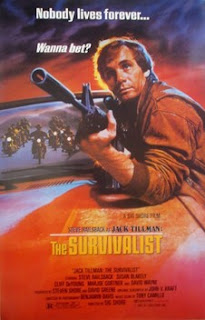 A mysterious nuclear explosion in Siberia brings the superpowers to the verge of nuclear war. Panic sweeps America and law and order collapses. The Constitution is suspended, martial law is declared and the National Guard mobilised. Jack Tillman is a construction contractor, Vietnam vet and survivalist. After a run in with the National Guard at his local bank, the Guard, headed up by local no good biker and Tillman's long time rival Lt Youngman (Gortner with a grey mullet) decide he must be made an example of. I say run in, he actually smashes the front of the bank in with a JCB to get a safety deposit box where he's got gold to barter with or something. As Tillman travels across country to retrieve his son, he is pursued by the National Guard biker gang.
Perhaps surprisingly, there seems to be very few films aimed at the survivalist demographic. This is one of them, playing out like your average militia fantasy- society breaking down without a bomb being dropped, the usual evil biker gang actually being part of the government (you do wonder how they get by with long hair and fruity make up in the military, perhaps this was a comment on the degeneracy of the secular liberal state?) and the good, honest small business man becoming the oppressed. It paints possibly one of the most depressing pictures of humanity in any post-apocalypse film, everyone turns into a mindless looter (with even the local hospital being attacked by drug hungry junkies), his doctor friend is portrayed as crazy for wanting to return to town to help people and is murdered for his pick up truck and it's every man for himself in a way that makes Panic In The Year Zero look like a piece of bleeding heart liberal propaganda. That would be one thing if it was a half way entertaining film, but it's just a sub-par action movie with some ropey acting and undistinguished action sequences, there's not even much in the way of unintentional humour to commend it.
NB: this is nothing to do with the Survivalist books by Jerry Ahern,which was a popular post-apocalypse men's adventure series in the 1980s. 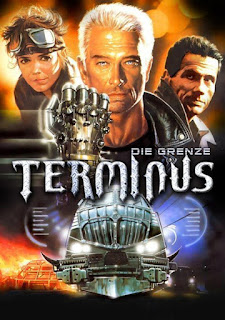 A genetically engineered child genius creates a race across a post-apocalyptic Europe involving computer controlled trucks. His driver is captured by a local militia and tortured to death, so a convict and a young slave girl manage to hijack the truck and continue the race, evading the militia and a psychopath driving another truck.


Bit of an oddity this one. On one hand, the involvement of kids, the lack of explicit violence and son on, gives it the tone of a kids film, but yet it has some dark undercurrents. Jurgen Prochnow steals the show with a triple shift as a clones of the same person- a doctor, a transgender scientist and the psycho with a lorryload of GM kids. Plenty of chase sequences should keep action fans happy, with seemingly the main reason for picking racing trucks is to show endless sequences of them smashing through rickety buildings. Most notable for the jive-talking onboard computer with a human mouth,which is way more disturbing than was probably intended.
Posted by ScottL at 10:52 No comments: